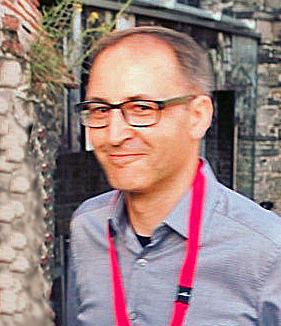 Roots
I was born on a Sunday in September of 1971 in Troisdorf (Germany) and grew up a few kilometers westward in a village called Mondorf, whose history reaches back to Roman times. It is located between Cologne and Bonn, directly at the eastern banks of the river Rhine and the estuary of the river Sieg. A beautiful landscape of river and water meadows and a perfect place for a great childhood.  Primary and secondary school were within a walking distance, so I had a lot of time in the afternoons to discover the surrounding region or play football, basketball or volleyball.

Career
I finished school in 1988 and decided to follow in the footsteps of my family: My grandfather, uncle, cousin as well as my older brother, all used to work in a laboratory. So I started a professional training as chemical lab technician at the Bayer AG in Leverkusen, which I successfully concluded three years later. Afterwards I accepted a job offer by the company and began to work in the Pharmaceutical Department doing dissolution testing and HPLC-analytics of solid dosage forms. In these times we had the general compulsory military service in Germany and I joined the army in 1992. I was stationed in a climatic health resort together with a friend from my training time at Bayer. We had a lot of fun and a quite relaxed job learning Russian for the observation of “hostile” radio transmissions. After 12 months I returned to my former employer and started to work with robotic systems. Besides that I decided to study technical chemistry which I finished 4 years later. In 1999, while I was looking for a new professional challenge, my department manager offered me to become a team member of a new laboratory group dealing with polymorphism of active ingredients. The offer sounded promising and for the next eight years the team became known as “The Polymorphs” and I had the chance to acquire deeper knowledge of solid-state chemistry, spectroscopy and thermal analysis. It was a wonderful time with great colleagues which came to an abrupt end when the company decided to shut down the site and relocate all development activities to Berlin. I took advantage of the situation and applied inter alia for a job as “Technical Manager Wood” at LANXESS. Apparently, my interviews with Thomas Jaetsch went well since he called me just shortly before I left for a hiking vacation with my wife on the island of Madeira and offered me the job. It was nothing but coincidence that Madeira is the Portuguese word for timber. I took it as a good sign and in December 2007 I started in my new position. Looking back on the last 14 years, I never regretted my decision because it worked out well for me. To work on a lot of interesting projects, travel to customers and conferences, meet wonderful people and have great colleagues, I could not ask for a better job.

IRG
My first conference was IRG 41 in Biarritz and the start was rather bumpy. Thomas Jaetsch and I got stucked at the airport Charles de Gaulle in Paris as our connection flight to Biarritz was cancelled due to the ash cloud of volcano Eyjafjallajökull. Additionally the airline couldn`t find our baggage, so we were forced to continue the travel without it. We jumped in a taxi and managed to get tickets for the TGV Atlantique from Gare de Montparnasse to Bordeaux and finally arrived at Biarritz close to midnight just with our carry-on bags. Despite this arrival, we had a good time at the conference and I still remember my first IRG meeting with a smile. It took me five more years before I had the opportunity to attend my second IRG meeting in Viña del Mar, Chile. Since then I only missed the meeting in South Africa due to a class reunion. Later I received the honor to become a member of the Scientific Programme Committee and I am currently serving as vice chair of Section 3: Wood Protecting Chemicals. For me, IRG is really a wonderful organization.

I live in Leverkusen with my wife Bettina and our kids Sarah (12) and Marie (12). Bettina is also working in a laboratory (of course) and she is managing the family. Twins are a real challenge, even grown up! My older son Collin (20) didn`t continue the family tradition and started a professional training as computer scientist last year. In my spare time I enjoy reading, good wine and hiking as well as supporting my favourite football club 1. FC Köln. 20 years ago I discovered how joyful the loneliness of the long-distance runner could be and since then I run 2-3 times per week, preferable in the morning. Sometimes even at IRG meetings.

This bio was written for the October 2021 IRG newsletter.