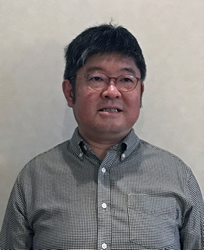 I was born in 1969 in Ajisu, Yamaguchi city. I immediately moved to Tokyo and spent time in Machida city and Kokubunji city. When I enrolled in elementary school, I moved to Mito City, Ibaraki, and spent time there until I graduated from high school. I moved houses a lot because my father was a professor in the intellectual history of modern Japanese thought (Freedom and People's Rights Movement) at various universities. Both my mother and elder sister were professors in Cookery Science (the retrogradation of starchy foods) and Child Psychology in universities, respectively. I grew up in a so-called family of scholars.
When I was around five years old I just happened to listen to Beethoven's symphonies on LP vinyl records and became obsessed with classical music, dreaming of becoming a conductor while swinging chopsticks instead of a conductor's baton. The wonderful encounter with classical music greatly influenced my life.

After graduating from “Mito Daiichi high school”, I moved to Fukuoka to attend the Faculty of Agriculture, at Kyushu University. I really wanted to go to a college of music to become a professional oboe player (I had started playing in junior high school), but that didn't happen. Nevertheless, I couldn't give up that dream, and while I was in university I was absorbed with orchestral activities. Through this I met my wife, Eiko, who was playing the violin.

When I entered the Department of Forestry and was in the doctoral course, a new analytical electron microscope was introduced into the lab, and I used this device to visualize the distribution of preservatives (inorganic elements) in treated wood, and obtained my PhD degree. As I used the analytical electron microscope to observe and visualize the beautiful appearance of wood microstructure (nature), my intellectual curiosity gradually filled me. I also felt that it had something in common with orchestral (music) activities, and eventually I realized that I wanted to live in the world of scientific research.

By the time I completed my PhD, I was already over 30 and couldn't get a permanent job right away. As Eiko was then a pharmacist, she worked for almost two years earning our living expenses (I am no match for Eiko!). I came to the realization that academic research in Japan is largely supported by women.
Around this time, Dr. Makoto Kiguchi, who worked at FFPRI (Forestry and Forest Products Research Institute) (he has since moved to Nihon Univ. as a professor), was interested in my PhD thesis. He welcomed and invited me to the FFPRI in December 2003 where I worked in the wood protection laboratory, and finally had a permanent job. Makoto strongly suggested that I should further improve my skills with the visualization technique, and recommended that I should spend time working with Prof. Phil Evans at UBC in Vancouver. I was grateful for that opportunity, and as I got funding from an OECD fellowship, I stayed at UBC as a visiting fellow for half a year from August to December 2006. Eiko accompanied me during this time.
While my visit to UBC was only for half a year, this event made a significant impact on my life. Even after returning to the FFPRI, I continued the visualization research to figure out the penetration mechanism of preservatives into wood cell walls, and then, I had a strong desire to capture it with nano and atomic level resolution using state-of-the-art electron microscopes.

After I got the permanent job at the FFPRI, I started to participate in the IRG, initially at IRG35 (2004) held in Ljubljana, Slovenia. I also participated in IRG38 (2007) at Jackson Lake, Wyoming in USA (I was delayed due to flight delays departing Japan, so Prof. Phil Evans presented on my behalf), IRG39 (2008) held in Istanbul, Turkey, and IRG Americas Regional meeting (2008) held in Playa Flamingo, Costa Rica. After the IRG Americas meeting, I became an IRG member and officially part of the IRG Family, which made me very happy. I also took part in IRG40 (2009) in Beijing, China, IRG41 (2010) in Biarritz, France, IRG42 (2011) in Queenstown, New Zealand, IRG43 (2012) in Kuala Lumpur, Malaysia, IRG44 (2013) in Stockholm, Sweden, and IRG45 (2014) in St. George, Utah, USA. After serving as a section chair for a while, I joined the Scientific Program Committee (SPC) for several years.

I was seconded from the FFPRI to the Forestry Agency, Ministry of Agriculture, Forestry and Fisheries for two years from April 2015 to March 2018. I unfortunately left my research activities during that time. Even after I returned to FFPRI after being seconded, I was engaged in research administration for three years, so I could not carry out research activities like before for almost five years.
However, I have resumed my research activities from around 2019, and thus I was able to participate in IRG meetings again, starting with IRG50 (2019) in Quebec, Canada. I was happy to be able to meet IRG members with my wife and son. I joined the IRG EC in 2020, and I hope to participate in IRG meetings as before -.from now on!

This bio was written for the October 2021 IRG newsletter.